1. If you could, would you be a movie star or a rock star?

3. Do you know anyone who's been on a reality TV show?

4. Have you ever met anyone famous?

1. Nope. I like my life the way it is. I don't need all the crap that comes along with fame.

2. Yup, I've been in the paper many times, usually connected with theatre work

4. Many times - again because of the theatre.

5. Not a clue. I've long since given up staying current with actors/actresses and my life, while lovely for me, is probably the stuff dry and dull documentaries is made from.

According to this blog analyzer, my journal is written by someone between the ages of 13-17. I'm not sure if that's a good thing or not...

Give it a go yourself! 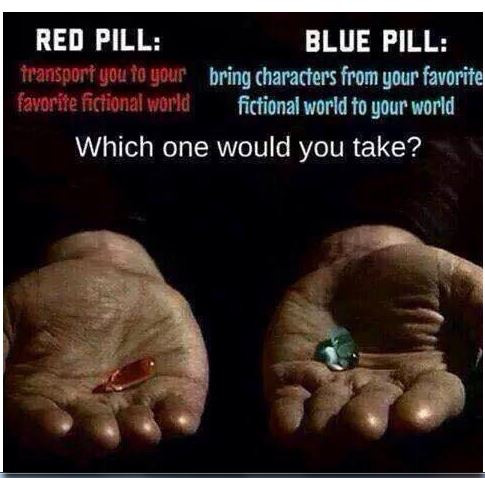 I've lived through the 60's once and the crap that women had to deal with back then is not appealing, so I'd say, "Hello, Illya. How nice to meet you."

What do you say?

So, I saw my orthopedic guy yesterday and he told me that I have Patellofemoral Pain Syndrome or Runner's Knee (which is sort of funny because I can't run. The best I can do is a very slow jog). He recommended icing it, taking aspirin and some PT (the office is located across the street from the theatre - yay)! There was barely any sign of arthritis, which was great news, so I came away very happy.

We had a pretty good evening with Barb and Jeff. This is the weekend that her husband stroked out in Greece and there are tons of bad memories surfacing. She was very brittle around the edges and said a couple not so nice things to me last night, which I ignored. Instead, I concentrated upon the good stuff, like hanging out with Jeff. I think she's a bit angry that we enjoyed his company so much in London. Still, that's her problem, not ours.

We exchanged gifts before going to dinner. As she's been in London a lot (she likes to brag that if you added up the time, she's been there for over two years), she is very hard to shop for, but we scored a hit with the Benedict Cumberbatch coloring book, a dozen fan-shaped gift cards, and a random quotes from Shakespeare tea towel.

We were dining away and then Jeff dropped a bombshell... well, sort of a bombshell, well really not unexpected, but still a surprise. He announced that he would only be traveling in the future with us and that he was already checking out stuff in Fiji Islands for our upcoming trip. We actually had sort of said in passing that it might be fun to go back to Fiji and explore it and the neighboring islands and he's already checking out flights and hotels. Saw a gorgeous one for $1,600 a night (too rich for my blood), so I suspect there will be more checking involved. On the way home, TBG said that he would be willing to toss the Panama Canal cruise for a trip to the South Seas. I found myself agreeing with him, but there's nothing in stone yet. We will have to see. It's something to think about.

Tonight we will be over at Chef's and Irene's. It will be a totally different evening filing with laughter and stories without any brittle edges. They have just come back from a food tour in Carmel, so I'm looking forward to hearing all about that. We didn't get around to talking about it last weekend. We also have to start making plans for the bunkhouse in July. I'm just hoping the snow will have melted by then so we can get through to it. The roads can be a little dicey.

Hope everyone had a great evening and will have a fabulous Saturday.

When you eat a sub sandwich(grinder, hero, etc.), do you start in the middle or from the end?

If you are recognizing Memorial Day on Monday, who will you be remembering?

What's the last bill you paid? (no details, just general power, water, gas, etc) Did you pay it by mail or on line?