Hope it's as special as you are!

Everything seems to be going well for little Patachou. His fever is gone and he's in full kitten mode. The other cats have come to terms with him and even Pyewacket is doing a bit of playing with him. Titan seems to be totally taken with him.

Yesterday The Boy came home to participate in a Work Day at the theatre. As it's his set(Sister Act they are building, it was good to have him on deck for it. He was pleased with how far along they are and how well things about coming. Seriously, he usually does nothing but complain. Last night there was none of that. *yay* TBG had to pop out and find a French Curve template for him (ours were too small) and after dinner, they went over to Hobby Lobby to pick up some glass paint for the stain glass windows.

We had planned on doing barbecue chicken for dinner, so it was not hard to toss a couple more pieces into the mix. We started with something from Weight Watchers, Grilled Shrimp with a Pineapple Salsa. I had a pineapple from the luau that needed using, so it made sense. I am also taking this to the park on Wednesday for the Waterloo concert. It went together easily, but we are still trying to figure out how to serve the salsa. It was very tasty, but a bit spicy.

Dinner was the chicken, first rubbed with a Moroccan rub and allowed to rest, then put in the oven low and slow for an hour before being taken to the grill for the last bit of cooking. I used up the rest of the Canoe House barbecue sauce on them. Accompanying the chicken were bake Parmesan Potatoes, a mushroom and asparagus stir fry and a salad with some Romaine lettuce and the rest of the Hawaiian potato salad. Dessert was an Australian pudding cake while we watched Whispers of the Heart. It was a Ghibli movie that The Boy sent us because the girl in it reminded him of me. *grin*

It was a late night, but it was nice to have us all home for even a short time. He leaves after his meeting tomorrow just before we head into the city to see Beach Blanket Babylon.

Hope everyone's weekend is progressing nicely! As always, if you want a recipe, let me know!

I can't remember a TV Guide that didn't feature a TV show. Can you? I don't know why we even buy toys. Patachou prefers my rolled up socks. 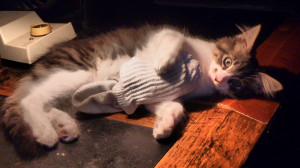 All four of the cats in close proximity. You can just see Pye's nose. She's looking out the window 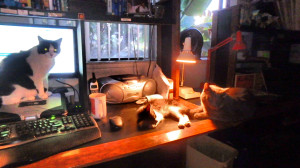 The boys napping together 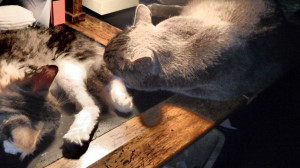 The little outside kitten is very tame now and quite plump. I have a feeling we have a home, but got out this morning. She (yes, I looked) mostly just wanted to be held and cuddled, just like her brother. Best of all, she has a kink in her tail just like Patachou's, so his little tail wasn't broken. It must be genetic. TBG, bless his heart, said if the kitten is still hanging around tomorrow, that I should gather her up and take her to the vet. We will see what happens.

Do you spend more on clothes or going out in a year?

Have you ever made your own clothes

Have you ever worn a micro mini skirt (not you, Dave)?