That Live Journal will behave itself. I am guessing from some of my f list posts that I'm not the only one being challenged today. I wish they would stop maintaining it.

Prior to this, I post the cat photos, so this will just be text. We had a lovely holiday, although it was a bit odd. Christmas Eve we usually go to dinner at Dave Wong's and then drive around to look at lights. This year Jeff invited us to stop by for apps and drinks. His daughter and her partner were there and, as usual, we tarried. Because of that, there was a two hour wait for a table at Dave Wong's. This place has never known a recession. We ended up going to his smaller deli (and was actually waited on by Dave Wong himself) and came straight home. No lights for Spikes.

Christmas morning I woke in a funk that I spent all day trying to unsuccessfully shake. The day used to be such a mass of chaos and confusion that for it to just be the two of us now, well, it's very quiet. The cats helped and the kittens were into everything. We talked on the phone with our friends and god daughter in Florida and The Boy and his partner in SF, but it just wasn't the same. and the fact that we didn't buy each other gifts this year didn't help (we have two very nice trips coming up, so I can't complain).

We did a prime rib roast for dinner and I learned a lesson about using a rub before tasting it. It was okay, but not what I was expecting. The roast come out okay, if a little done for my taste, and we had baked Yukon Gold potatoes, roasted onions and Brussels sprouts. We watched a little news and they caught me with a 'look who's dead' segment and they didn't mention Leonard Nimoy or Robert Vaughn, two major players in my world. That was it, I wailed like a little girl. There was just so much death this past year and it all came to a head all at once. I just want this year to be over and done with. We started watching Totoro until Doctor Who came on.

Today has been much better. We had roast beef hash from breakfast, took a long nap (sorry I didn't hear the phone Jkkitty) and then got up and went shopping. I scored some cat food for 45 cent a can (when you go through six a day, that's a huge savings) and cat litter. We poked around Cost Plus, but most of their stuff was pretty well picked over. We stopped at Target for toothpaste, looked at their Christmas stuff, I picked up a new rug for my bathroom and then we went to El Torito's for lunch. Now we are in for the day and I have the prospect of watching the rest of Totoro and not having to work tomorrow.

And I lied. The boy gave us this. It's The Baron from Whispers of the Heart. 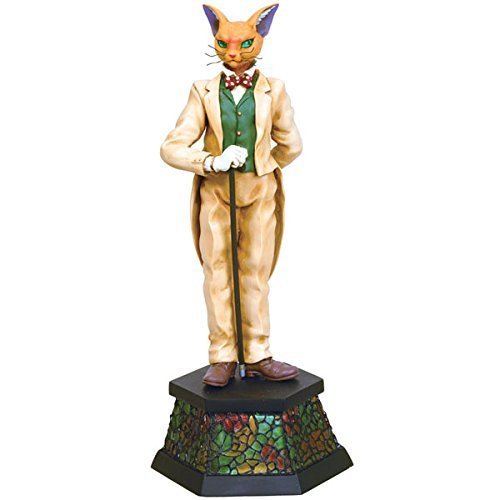 He also gave us a Howl's Moving Castle shower curtain and some great cat mugs. He knows us too well

Do you like margaritas? If not, what is your favorite adult beverage?

When was the last time you read a comic strip and which one?

Do you know CPR?