A Halloween Treat for Jantojones 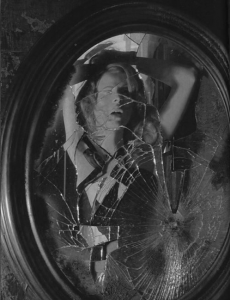 Wherever he was being held was big, really big, almost too big. Illya felt as if he’d been wandering around in it for weeks instead of hours.  There had to be a way out.  He needed to find that and he needed to find Napoleon.

Illya steadied himself with a hand to the wall and closed his eyes against the pounding behind them. His stomach was on a roller coaster ride and for a nickel, he’d find a quiet corner and vomit.  He felt as if he was coming off a three-day bender.  One day THRUSH would hopefully create a knock-out drug without all the nasty side effects.  Of course, it did tend to hamper escape attempts… unless you were Illya Kuryakin.

Somewhere in this mess, they were holding Napoleon. He needed to find his partner and escape, but mostly he just needed to stop feeling so dizzy.

He swallowed, feeling the rough scratch of old paste. The walls must have been papered once upon a time.  The room swayed and Illya moaned, taking small joy in that there was no one to hear him.  He rested his head against the yellowed wallpaper.

The thought made Illya’s eyes open wide. The formerly bare surface was now covered with a faded, yellowing print. What is happening? He thought as he looked around the hallway.  It seemed, newer?

Have you found a door yet?

Not even one to our own dimension. Steel, what is happening?  How is this possible?

No idea, but we will figure it out.

Steel stared at a wall, the paper yellowed and peeling. Despite his bravado, this place was a confusing mass of twists and turns.  Time seemed to bend here and he wasn’t sure how long it had been since they’d arrived.  Deep inside, he felt trapped, as trapped as he’d been in that diner.  For a moment, he was overcome with the despair, anger and helplessness that time had brought to him.

He put a hand against the wall and took a deep calming breath as the room bucked and swayed for a moment. His stomach lurched, a totally unfamiliar sensation, and he groaned softly.  There were times that taking human form, then he let the thought trail off.  The surface beneath his hand, formerly soft and smooth was now roughly pebbled, an odd contrast.

“Sapphire, are you certain this is where our Assignment was to begin?” There was no response.  Sapphire? Sapphire, can you hear me?

Steel looked around anxiously. The corridor seemed very different, much older and he felt very much alone.

At least the change had improved his symptoms. Illya let his senses explore the strangeness of his circumstances.  The air smelled old and stale, but not mildew laden as before.  Instead of abandonment, it felt more like the residents were merely gone for an extended time.  Illya smiled at that, but it was as if the house was expecting someone back any minute now.

“There you are! I’ve been calling you for the past ten minutes.  Why didn’t you answer? Are you—?”  Illya turned to face the speaker, an attractive blonde wearing a blue sheath dress.  “Who are you?  Where’s Steel?  What have you done with him?”

Illya blinked and rubbed his right temple. “No idea.”  He longed for the comfort of his P-38’s weight beneath his left arm.  Still, he didn’t feel any threat from her.  In fact, just the opposite, she felt somehow familiar.  “I could ask you the same thing.  For the record, I am Illya Kuryakin.”

She approached him, obviously curious. “You look so much like him, but younger.  How is that possible?”

“They say everyone has a twin somewhere – for better or for worse. I thought I’d already met mine.”

She reached out and hesitantly touched his face, then her eyes grew vividly blue. Illya wanted to pull away, but he couldn’t.  Instead he stared into those blue eyes, transfixed.

“You aren’t Steel,” she announced as her eyes returned to normal.

Illya was getting impatient with her. The last thing he needed right now was a tag-along innocent.  “Yes, I know.  Now if you will excuse me, I need to get out of here.”

“And, again, I am in agreement with you.”

“No, I mean, you do not belong in this dimension. You are… mis-placed.”

This time Illya let out an exasperated sigh. “Look, I’m trying to be polite, but this is over.”

He turned to stalk away, but she caught his hand and gasped.

Sapphire, where are you? Answer me?

Steel broke the connection, well, non-connection. This was preposterous.  He looked first right, then left, trying to decide upon a direction.  That’s when he heard footsteps.

“Finally,” he muttered beneath his breath, only to be shocked when two men appeared.

“There he is! Thought you could get away from us, didn’t you, Kuryakin…”  The lead man trailed off.  “What the hell?”

“What’s with the monkey suit?” his partner asked and Steel frowned.

“The proper term is tuxedo.” Steel knew this because Sapphire had pointed it out to him.  Apparently, it had been a poor choice for their assignment.  He never really knew how to blend in.

“So I have been told.” Steel caught the hand and held it in place for a moment before twisting.  His attacker was down on his knees, howling in pain.

The first man swore, lifted what Steel assumed to be a weapon and fired. The bullet flattened as it hit his skin.  Steel steeped forward briskly, while the man was still frozen in surprise and bent the rifle in half.

“Let’s not try that a second time, shall we?” Steel dropped it to the floor.  “Now where am I and what have you done with my partner?”

The second man managed to scurry away, cradling his injured arm. The first helped him to his feet and they fled dropping a flashlight behind them.

Well, at least he could see where he was going now, Steel thought as he sighed and started walking. He stopped at the door-lined hall, pausing before a shattered mirror.  He hated mirrors.  They were dangerous things, portals to the unknown as far as he was concerned.

He cried out happily at the reflection. It was Sapphire.  He turned, but he was alone in the hall.  That’s when he realized that his image wasn’t reflected, just hers.

She seemed to be saying his name again and again. He involuntarily reached out for her, touching the shards without thought.  A sharp sensation tore up his arm.

“So you are trapped here, too? Are you THRUSH?”  Illya watched the woman rub her hand.  “Is your hand alright?”

“Yes, it was…” She stopped at that point and smiled sadly.  “It was Steel.  For a moment, I felt him.  You mentioned thrush, you mean, the song bird?”

“Sadly, nothing like that, although I have made one or two of them sing in my day.”

“You are wrong. You aren’t supposed to be here.”

“Agreed. I was running from THRUSH--”

“… yes, and stopped to get my bearings. This house is very confusing.  It’s like a labyrinth.  I seem to keep getting turned around.”

“We had noted that as well. We are… uncertain of our assignment as well.”

Illya smiled at her use of the word. “We seem to be in the same situation.  All I want to do find my partner and leave.”

“Yes.” They started walking again, this time down a long hallway.

“This is familiar. I’ve passed that mirror twice already.”

Sapphire looked cautiously at it. “I don’t trust them.”

Illya smiled. “I don’t see why.  You are an attractive woman.”

“Thank you, but it is not vanity I fear. Mirrors can be more than simple reflective devices.  They can trap and hold.”

Illya hid his grin. “Of course.  My grandmother used to tell me of another world that existed in the mirror and would tease me by wondering if we were real or if they were and we the reflections.”  Illya chuckled at the memory.  “I didn’t sleep for two nights afterwards worrying about it.”

Sapphire tipped her head. “Another world?”  She hazarded a look into the glass.  “Steel?  Steel?  Are you in there?”

Illya shook his head and walked away. He opened the nearest door, then another one and another.  All were empty windowless rooms.   Then he stopped.  Where was the power coming from to operate the overhead lights?   THRUSH must have rigged up a generator.

He reached the last one and pushed it open. He froze, starting into the black void.  Even though he could see nothing, all the hair on the back of his neck rose and he took a hasty step backwards, shutting the door behind him.

Whatever was in that room was not something he wanted to be part of. He hurried back to Sapphire and froze again.  She was staring into the mirror and repeating “Steel” again and again.  It reminded Illya of a record stuck in a groove.

He grasped her by the shoulder and shook her, but she pushed him away as if he was nothing more than a fly. “Sapphire, snap out of it!”

Desperate, he picked up the closest item he could find, a vase and flung it at the mirror. It shattered and Sapphire gasped, tumbling backwards.

“Steel!” she screamed and Illya caught her. For a moment she looked hopefully at him and her face clouded.

“I’m sorry. It’s still just me.”  Illya helped her down to sit on the floor and then went to the mirror.  “Wow, I really did a number on it.  By the way, that last door has something going on behind it – a black void.  Be careful.”  He touched the shattered glass and his eyes went wide.

Steel blinked, blinded by the brightness of his surroundings. He shielded his eyes until they grew accustomed to the light and spotted someone on the floor.  Not just any someone but Sapphire.

“Sapphire?” he asked as he knelt.

She looked at him sharply. “Steel?”  When he nodded, she practically threw herself into his arms.  “Oh, Steel, I was so worried.  How did you get back?”

“I’m still trying to figure out how I left in the first place.” He smiled at the warmth of her embrace.

She touched his skin where the bullet had left a bruise. “Are you hurt?”

“No, but I am ready to see the last of this place.”

“Your twin; he said that he found something behind the last door and to be careful. I am going to assume that it is our assignment.”

“Finally.” He helped her to his feet.  “Something I understand.  Shall we?”

At the twist of pain behind his eyes, Illya almost cheered. The hall he was in was dark and filled with an accumulation of aged junk.  He heard a cough, familiar and most welcomed.  He squinted in its direction and grinned.

“See? You can escape without me.”  He went to Napoleon and wrapped an arm around his waist to help stabilize him.

“I don’t know what happened, but you sure scared the pants off my THRUSH guards.”

“I don’t need luck. I have you.  I just need a way out and I think I might have found it.  Just do me a favor and don’t touch anything.”

Illya grinned. “Me, either.”